Celebrated annually at San Diego Comic Con International, the 2014 Eisner Awards, held last night, continued IDW Publishing’s 15th anniversary year! IDW Publishing and the Library of American Comics are proud to announce a total of seven combined awards! Thank you to the judges and all of our esteemed nominees for helping us celebrate this anniversary year at the Eisners! 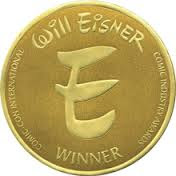 Winning the award for Best Comics-Related Book were Dean Mullaney and Bruce Canwell, of The Library of American Comics, for their riveting and thorough exploration into the life and works of Alex Toth in Genius Illustrated. Additionally, Mullaney took home the award for BestPublication Design!

The unrivaled line of Artist’s Editions, spearheaded by IDW’s Scott Dunbier, again proved to be a critic pleaser at this year’s awards. With three Artist’s Editions nominations in the category for Best Archival Collection/Project – Comic Books, Will Eisner’s The Spirit Artist’s Edition, took home the eponymous award!

For his drop-dead gorgeous adaptation of Richard Stark’s Parker: Slayground, Darwyn Cooke earned (both) his sixth (and seventh) Eisner Award(s) with IDW! For Best Adaptation From Another Medium (and Best Lettering), the fourth adaptation of the acclaimed series by Cooke, joins The Hunter, The Score, and The Outfit, as Eisner award winners.

Showing off her talents across the industry, Jordie Bellaire was awarded Best Colorist for her staggering body of work in the past year, including IDW’s series The X-Files: Season 10!

Always thrilling to receive an award from the premier award show in the comic industry, this year’s Eisner Awards are an honor among such great talent and work! Congratulations to all of the nominees and winners!

The Walking Dead Comic Ends with #193

The Walking Dead #192 Brings an End to an Era

Warriors Come Out and Play on FYE Steelbook

0
When someone asks me to recommend a movie that showcases classic New York the first movie that comes to mind is The Warriors. This...

Review: The Walking Dead 1008 – The World Before

The Six Invitational 2020 Kicks Off February 7

Venture into the Weird West with Pinnacle Entertainment Group